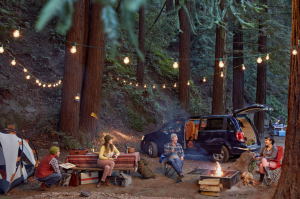 As much as I am really quite terrible and inexperienced when it comes to most things camping, I’ve always been pretty good about choosing my camping buddies. Just like some people are really good at finding Wichita KS Towing Services if their car breaks down in the middle of nowhere. Granted, one time I was totally separated from my camping-mates, but it was at a festival, and there was no cell phone reception because apparently no one thinks about boosting the cell phone tower signal when the population of a town is boosted by 50 000 people. So it didn’t really have anything to do with the camping or the choice of companions, per se, rather the nature of the festival. Anyway, you’ve got to be sure you’ve got the right people with you when you camp, no matter where you are.

For me, especially, I need to make sure I go camping with someone who knows what they’re doing. If I went with other novices, it would be bad news bears. I need someone who’s been around tent pegs and tiny grills and canoes and campfires to have any hope of surviving my experience. Preferably, I’d be with an experienced camper who has experience dealing with inexperienced campers. Does that make sense? I just mean that I would like to be with someone who I know has the patience to teach a completely useless person (read: me) how to do things without getting frustrated and grumpy. Because that would be unpleasant.

May seem obvious, but make sure you go camping with people you like. I know, duh. But this is really important. It’s one thing going out with people you half-tolerate for an evening; you have to deal with it for like three hours, and then it’s over and you can go home and complain about them. But camping? Nah. You’re in this for at least a couple of days, in a very confined space, and imagine if it rains! You’d be stuck in a tent with those people for pretty much a whole day. I think we can all agree that no one wants that. So pick your camping-buddies carefully.

And also keep in mind that the people with whom you want to spend a night out are not necessarily the people with whom you want to spend days trekking through the woods. Even if you really like someone, really get along with them, that doesn’t mean that would enjoy a camping trip with that person. I think, honestly, that I am one of those people I’ve just talked about. I would like to think that I am likable, and that all my friends aren’t just faking it, but in the same breath, I don’t know how many of those people (the few of them who are avid campers) would enjoy me as much when I have been plunked down in the middle of a national park with nothing but a what I’m carrying on my back (and you know I’ve forgotten at least seven essential camping items, for sure). Anyway, what I’m saying is, choose competence, and choose compatibility. Don’t necessarily choose your best friend if your best friend hates bugs. I feel like that might be Monopoly-level friendship endangerment.